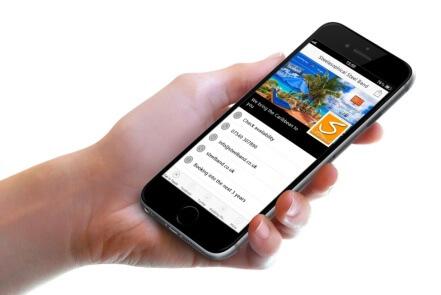 Palm Beach in Aruba features white sand and excellent swimming conditions in calm water. All up and down this beach are resorts, which makes the area more crowded than some other beaches on Aruba, but also provides a lot of amenities and services. All resorts open their amenities and grounds to the public, including equipment rentals.

St. Martin’s flagship beach and is often referred to as the “French Riviera of the Caribbean”. This expansive one mile beach is home to numerous beach bar and restaurants, who offer various menus, from formal French to pizzas, burgers and local fare. Be forewarned, this beach is divided into two sections.

Grenada is home to dozens of stunning beaches and the serene Grand Anse is one of the best. Known for its serene and calm conditions, Grand Anse is two miles of white sand, on the western side of the island, sheltered from high waves, strong currents and winds. The beach is one of the most famous Grenadian landmarks and is overlooked by some of the island’s best hotels and grand houses.

Trunk Bay is a National Park beach on St. John in the Virgin Islands. Rated as one the world’s most beautiful beaches by the National Geographic Society and among the best beaches in the Caribbean it attracts hordes of cruise ship passengers. Amenities on the beach include a snack bar, showers and restrooms, a lifeguard, and, most famously, an underwater trail for snorkeling its coral reef.

Englishmans Bay is a secluded beach on the leeward coast. Although the bay does not draw the large numbers of beach-goers that Tobago’s western beaches do, it is considered as one of the island’s most beautiful. The beach itself is a classic crescent shape, capped by two heavily forested headlands. The sand starts immediately after the forest ends and is of a shallow to medium gradient and somewhat coarse grain. The waters are calm year-round and boast magnificent snorkeling and swimming.

Playa Paraiso is located on Cayo Largo del Sur, a coral island belonging to Cuba. The beach, together with nearby Playa Sirena, is the most outstanding of the spectacular stretches of sand along the length of the island. Located on the more protected western end of Cayo largo, these are broad expanses of glistening, fine white sand, bordering the clear Caribbean Sea.

The Bahamas may be touristy, but with 700 islands the country, the nation still offers some of the best chances for unadulterated escape, especially if you’re into the sport of bonefishing or the sport of private-villa buying; Johnny Depp, Nicholas Cage, Shakira, Roger Waters, and Eddie Murphy all have had a go.

Kimberly Wilson-Wetty, co-president/owner of Valerie Wilson Travel, a New York-based agency specialising in high-net-worth clientele, also credits to easy accessibility for the Bahamas’ popularity—commercial flights vs. private jet vs. yacht—and standout resorts like Paradise Island’s One&Only Ocean Club. The luxury traveler is really driven to the hotel when they’re choosing the island—especially in the Caribbean, says Wilson-Wetty, “There aren’t just a lot of ‘luxury islands.’ Baha Mar brought the Bahamas a new limelight, an element of intrigue.”

Tiny, boho-chic Anguilla has the best dining in the Caribbean, with over 100 multi-starred restaurants. But what really puts it up the list: privacy. Tourism here doesn’t happen in hordes or on cruise ships with paparazzi documenting the scene. “Anguilla is not for those seeking validation,” said Hon. Cardigan Connor, a parliamentary secretary for tourism, “Our low-key, understated vibe is what attracts our celebrity clientele.” (Indeed, among just the 1 percent, the country ranks No.2.) To add to the bliss: the only Turkish hammam in the Caribbean opened recently at the new Zemi Beach House

Aruba got a little hokey in the 1980s and ’90s after massive tourism developments and a certain Beach Boys song introduced this small tropical paradise to the hoi polloi, so much so that in 2007, the government moved to slow the growth. This past June, the island announced progress on its $1 billion “revitalization and beautification” investment program, including hotel and airport upgrades to recapture its exclusive feel.