Have a go at playing Virtual Steelpan online

Using just your computer and mouse!!

which you can play with your mouse. 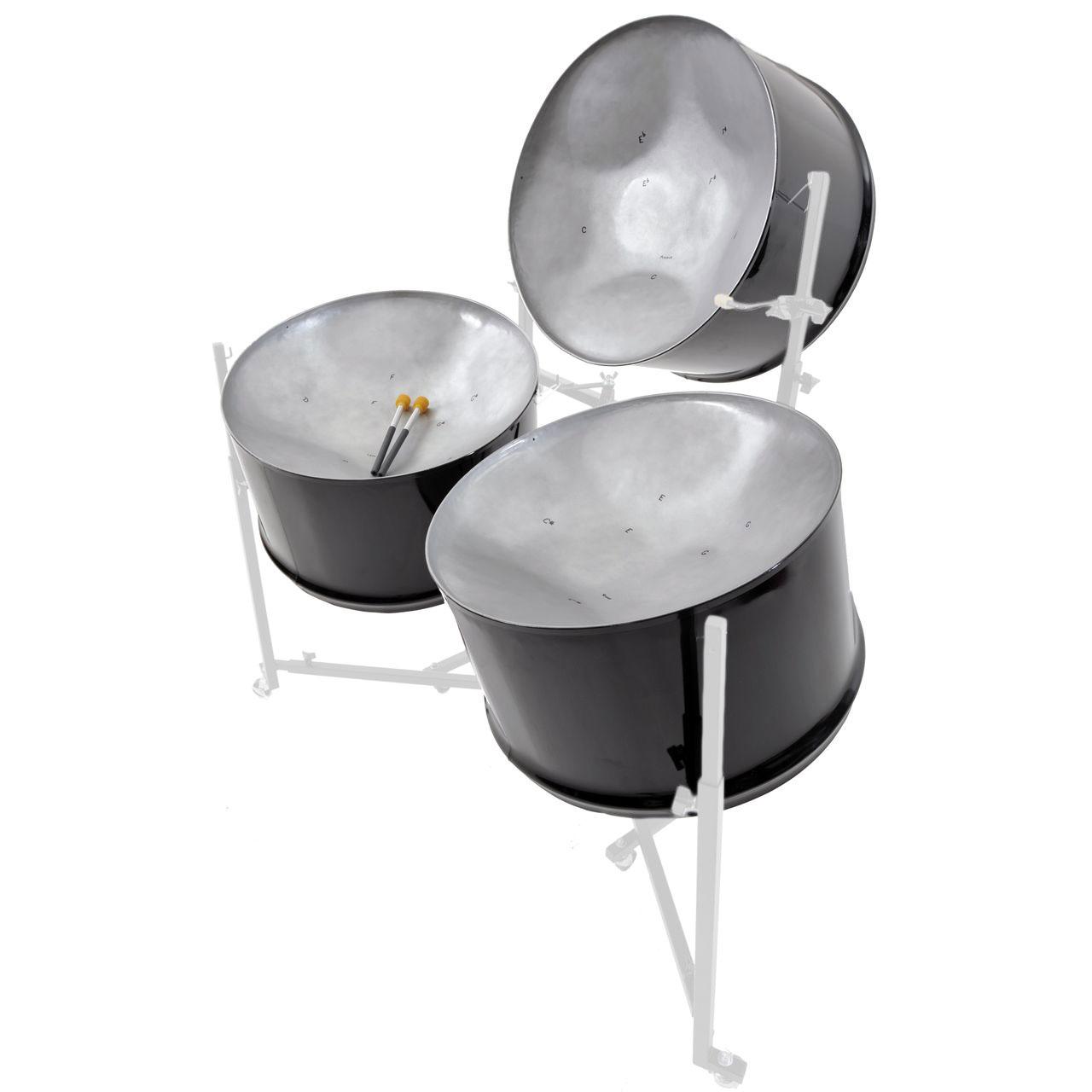 Play the Steel Pan on Keyboards
Play with your mouse.

The E-Pan enables musician to play in the conventional way without having to relearn another method to master the new instrument, also eliminating the need for studied stage positioning and maintaining proper intonation.

– Score their own music

– Learn how to read music

– Teach in the classroom digitally

Were created on the Caribbean island of Trinidad in the 1930s, but steel pan history can be traced back to the enslaved Africans who were brought to the islands during the 1700s.

They carried with them elements of their African culture including the playing of hand drums. These drums became the main percussion instruments in the annual Trinidadian carnival festivities.

In 1877, the ruling British government banned the playing of drums in an effort to suppress aspects of Carnival which were considered offensive. Bamboo stamping tubes were used to replace the hand drums as they produced sounds comparable to the hand drum when they were pounded on the ground.

These tubes were played in ensembles called tamboo-bamboo bands.

The steel pan is the national instrument of Trinidad and Tobago. It is the only musical instrument invented in the twentieth century. Created in the 1930’s, the steel pan owes its genesis to the carnival festivals of that era. It emerged as the product of the energy of the people directed towards cultural self-expression. The steelpan therefore became a cultural vehicle forged from the historical and social conditions prevailing at that time. Its development was moulded by the ethnic influences of our heritage.

HISTORICAL DEVELOPMENT
Carnival celebrations in the late 1800’s were marked by disturbances which prompted the authorities to prohibit the unlicensed playing of all percussion, string and wood-wind instruments by way of legal ordinance. This led to the development of the Tamboo-Bamboo as a musical instrument. The Tamboo-Bamboo was made from bamboo cut to various lengths and its sound was produced by stamping onto the ground. Carnival celebrations in the five decades from 1884 to the late 1930s witnessed the growing rhythms of Tamboo-Bamboo musical ensembles in street processions with accompanying brass and string instrumental bands.

Several problems with the bamboo material, including its tendency to splinter easily, resulted in experimentation with other materials such as metal containers, to produce various sound effects. These experiments resulted in the discovery of the steel drum since it proved to be more durable than other material and capable of greater tonal versatility.

This drum, originally used to store petroleum, evolved into the steel pan by making cross-sections cut into the 55-gallon metal container. Through further experimentation, percussive sounds of various pitches were produced by indenting and tempering the concave metal surface. The steel drum therefore was used in the creation of what is known today as the steel pan, and although there have been several competing claims to its invention, it is generally accepted that the steel pan was first made around 1939 in Trinidad and Tobago.

Carnival of 1940 witnessed the first public appearance of the steel pan and it has since evolved through the ingenious innovations of various contributors. These innovations have resulted in instruments of different tonal ranges which now comprise the musical ensemble of the modern steelband.

The steelpan has risen from the deprived urban tenements of Port-of-Spain where it was forged, to acceptance and promotion by the international community. What has brought this instrument forward onto the world stage was the devotion, talent and industry of its early followers. This is a significant achievement in the face of the financial obstacles and disdain by society for the thuggery and violence once associated with it.

Making a Steel Pan (Steel Drum) from a Metal Drum

There are ten steps in this process.

‘We bring the Caribbean to you’

The repertoire of the steelband is extensive. Steelbands in Trinidad have a tradition of re-interpreting the current year’s calypsos for carnival performance; rarely will a calypso from a previous year be heard at carnival or the Panorama music competition. Bands that perform all year round (both in Trinidad and in the so-called ‘pan diaspora’) have long prided themselves on being able to perform many types of music, particularly Latin and jazz numbers, film music and other popular tunes. Pannists also have a tradition of performing classical music which dates back to 1946, both in calypso tempo (known as “The Bomb”) and straight (generally in concert or music festival contexts). In these contexts, accuracy and faithfulness to the original are highly prized. While many American and British audiences demand to hear Harry Belafonte songs on pan, these are generally inauthentic to the Trinidadian tradition.

For many years now there have been attempts to use the steelpan in various contexts other than those with which it is stereotypically associated. The first known use of steelband in a theatrical performance (outside of Trinidad and Tobago) was in Harold Arlen’s 1954 Broadway musical House of Flowers, in which Enid Mosier‘s Trinidad Steel Band performed in several songs. British composer Daphne Oram was the first composer to electronically manipulate the sound of the steelpan after recording a band (probably Russell Henderson‘s Steelband) in 1960. The first use of pan in a commercial pop record was by The Hollies in 1967 with “Carrie Anne” Loggins and Messina feature steel drums on the song “Vahevala” from their 1971 album Sittin’ In.

An international festival, the World Steelband Music Festival, has been held intermittently in Trinidad since 1964, where steelbands perform a test piece (sometimes specially composed, or a selected calypso); a piece of choice (very often a “classic” or European art-music work); and calypso of choice, in a concert-style venue. Panorama, the largest steelband contest in the world, occurs during Carnival celebrations in Trinidad.

Steelpans were introduced to the genre of Jazz Fusion by players such as Dave Samuels and Othello Molineaux in the 1980s, and Jonathan Scales in the 2000s. The sound of the steelpans adds a pleasant and accessible sound to an otherwise complex musical style. They are featured in the early fusion album Morning Dance by Spyro Gyra.

PanBrassOrama is a concept album arranged, programmed and performed by Gary Trotman. A midi concept album fusion of Panorama and a Soca Brass Band. A 3 years project completed in 1998, with most songs are tributes to the collaboration of Jit Samaroo, Lord Kitchener and Amoco Renegades