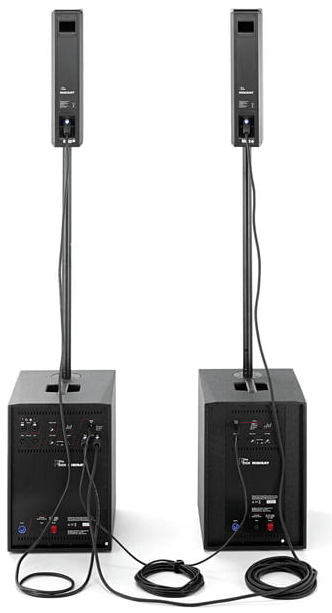 In the meantime, line-array systems are developing a sound pressure and sonority that would not have been possible 15 years ago given the small dimensions.

Similarly with active mini-PAs, which are not only much cheaper and therefore affordable for everyone, but are also designed smaller and lighter weight.

Also included in the package is a ten meter long pro snake TPM 10 XLR cable that provides the slave sub with an audio signal. In addition, two aluminum support rods are supplied by König & Meyer.

At the bottom, these have a sturdy 20 mm thread, which is screwed into the metal plate on the sub.

The other end of the 88 cm long tube is open and there has a diameter of 35 mm, of course, suitable for the tripod flange of the included satellites.

The 19 kg bass box can be removed from the open packaging via a stable, plastic handle that is inserted at the top. The recess around the handle is so big that you can easily get the sub from the packaging with gloves. Although the handle sits exactly over the center of gravity of the cube, still two side handles would have done well!

There is no speaker grill on the front of the bass system. The 12-inch neodymium woofer sits behind a continuous wooden panel, which is fringed all around with a two centimeter wide, black plastic band. Beneath this well yielding plastic panel are the screws of the front panel. At the bottom is the bass reflex opening, which is 320 x 60 mm. The outer wooden edges on the top are slightly beveled towards the rear, which facilitates the stacking of the woofer and then increases the stability.

On a metal plate on the back is the connection field. To protect the controls during transport, the plate is embedded two centimeters offset inwards into the chassis.

In the upper third is the input section for the two side signals. Two cinch sockets sit at the top, and underneath are the XLR / jack combo sockets with lock. The balanced inputs include XLR outputs that loop through the injected signal directly. To the right of the interfaces is the volume control for the entire speaker system. One level down, the controller has found room for the subs level. Its signal is tapped behind the overall volume control. Right next to it you can adjust the cutoff frequency in the range of 80 to 180 Hz continuously. The phase of the bass can be rotated by 180 degrees using the slide switch.

Four LEDs in series indicate the operating status of the amplifier. The left outer LED lights green after switching on the power amplifiers and another green LED acknowledges an applied audio signal. A red LED visualizes overloads of the input, and the red LED on the far right signals electrical or thermal problems, that is, when one of the internal protection circuits has been activated.

Top right there is an XLR output for connecting another subwoofer. Below are the two Speakon NL-4 jacks for the satellites. They are mounted so that the locking mechanism of a cable always points upwards. At the bottom of the metal plate is the blue Lockable PowerCon socket on the left for a mechanically safe power supply. The system is finally switched on via a large, red illuminated rocker switch.

The chassis of the very slim satellites are made of plastic and accommodate four 3.5-inch Neodymium broadband speakers. A black perforated metal plate on the front protects the four transducers against external influences. Relatively far up on the back of a plastic handle is embedded, in which three fingers find comfortable place. In the lower part of the back panel, a Speakon NL-4 connector is inserted in a recessed plastic plate at an angle of 45 °. On the one hand, this simplifies handling and, on the other hand, prevents damage to the cable due to kinking. On the underside of the column, a 36 mm tripod flange is embedded, which accommodates the supplied K & M spacer tubes or other commercially available speaker stands.

Little dwarf with a strong kick

If a sound reinforcement construction has become more popular in recent years, it is the PA columns or the line array system. There is hardly a provider who does not have the mostly optically appealing concept with the comparatively small space requirement.

What went through just a decade ago as a small vocal system nowadays has several kilowatts of power when required and in a weight class that can be moved by a single powerful man after disassembly if necessary.

With the box miniray, the Thomann house brand “the box” also has such a system, which, with its very small dimensions and a decent output, targets a wide range of applications from rehearsal rooms to small stages.